Black Sabbath unleashed the group’s fourth album in two years in 1972 with Vol 4. Stacked with classic tracks like “Supernaut,” “Changes,” and “Snowblind,” the record harnessed the group’s surging popularity to reach the Top 10 on the Albums Chart in the U.K. and the Top 20 on the Billboard 200 in the U.S., on its path to being certified platinum by the RIAA.

The innovators of heavy metal revisit Vol 4 on a new collection that includes a newly remastered version of the original album along with a trove of 20 unreleased studio and live recordings. VOL 4: SUPER DELUXE EDITION will be available on February 12 as a 4-CD set and a 5-LP set pressed on 180-gram vinyl, Both versions come with extensive booklets featuring liner notes with quotes from the era from all four band members, rare photos, and a poster with previously unpublished early artwork of the album using the working title Snowblind. Both the 4-CD and 5-LP versions are available for pre-order now at the https://wickedworld.net/ store.

Bolstered by a fresh remastering, Vol 4’s ambitious arrangements and complex grooves have never sounded more inspired and menacing. Originally released in September 1972, the album marked two major changes for the members of Sabbath: Ozzy Osbourne, Tony Iommi, Geezer Butler, and Bill Ward. While their previous albums – Black Sabbath, Paranoid, and Master of Reality – were produced by Rodger Bain and recorded in England, they instead chose to produce Vol 4 themselves and record it at the Record Plant in Los Angeles.

The generous addition of bonus material on VOL 4: SUPER DELUXE EDITION begins with six previously unreleased studio outtakes from the original sessions for the album. Each one has been newly mixed by Steven Wilson using the analog multi-tracks. Highlights include outtakes for “Supernaut” and “Changes,” as well an instrumental version of “Under The Sun.”

The set also features 11 additional studio recordings (also newly mixed by Wilson from the analog multi-tracks) that spotlight alternative takes, false starts and snippets of studio dialogue. These tracks transport listeners into the studio with the band and offer some insight into the making of the album. Along with several alternative takes for “Wheels Of Confusion,” these recordings also include outtakes for “The Straightener” and “Snowblind.”

The collection concludes with a searing collection of live performances that re-create a typical setlist from Black Sabbath’s tour for Vol 4. Recorded in March 1973 at various stops along the band’s U.K. tour. The recordings were originally slated for a live album that was ultimately shelved. Although some of these performances have been previously available in various states, the release marks the first time that a full 1973 live Sabbath show has been recreated. The live audio has been newly mixed by Richard Digby Smith using the original 16-track analog tapes to achieve a level of fidelity not heard on any previous incarnations. Included here are thrilling live versions of Vol 4 tracks (“Tomorrow’s Dream” and “Cornucopia”) and fan favorites (“Paranoid” and “War Pigs.”) 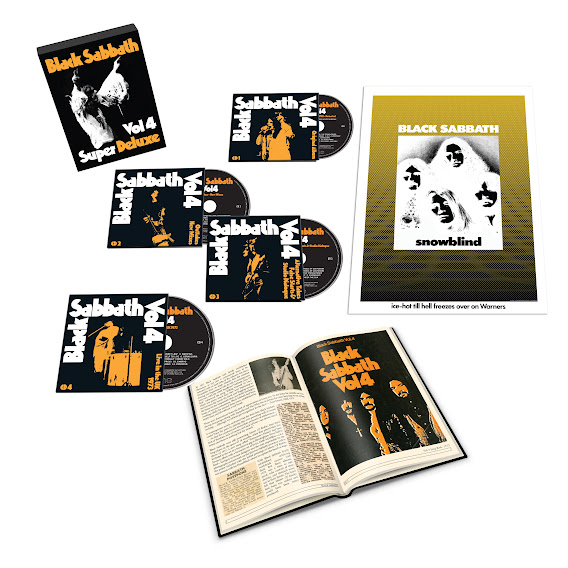 The next in the series of Black Sabbath Super Deluxe editions and the follow up to Paranoid edition by BMG. Again the series skips an album from the logical chronological order, overlooking the classic debut and Master of Reality we jump to my favourite Ozzy Era Sabbath Vol 4. I first bought this album in a second hand record store in Belfast when I was growing up. Quite a diverse album in that as well as the granite hewn heavy songs it also contained the ballad Changes .The song which in recent years has taken on a new lease of life when Ozzy re recorded it with his daughter Kelly.

As usual with BMG the package is a veritable treasure trove for long standing fans and collectors with its alternate versions, studio takes and also a complete Sabbath Live show. It is those previously unheard of gems that give the listener a sharper insight into the studio and recording process.

I absolutely love the packaging of these releases-and as I indicated with my review of the previous Paranoid release they appear to have been created with love and care for the fan and connoisseur rather than coming across as a rushed release purely to fleece fans of yet more money for an album that they already have in their collections. These deluxe serve as a friendly introduction to albums that people already know-but with enough bells and whistles to create new interest and collectability.

I do hope however that BMG are able to lavish similar care and attention on their classic debut album release in addition to Master of Reality-or is that just the slight OCD element in me personally?

Fans can find Black Sabbath at the following locations:

Today’s #HonorRollRecipient goes to @allgoodthingsrock . This band stole the night opening for #POD that night at @woolysdm in #desmoinesiowa …here is how they earned their rightful spot on #ScholasticPerspectives’ #HonorRoll. 1. On #MentalHealthMonday, their song #HoldOn is #AllGoodThings begging the listener to hold on for another day 2. Their collabs with #HollywoodUndead and #HyroTheHero are things of beauty. 3. Their song #Kingdom will cause you to rally with your comrades and raise your fists in strength. this album is packed with more anthems than Francis Scott Key! Go pick up #AHopeInHell wherever music is sold! #educatorsofinstagram #podcastersofinstagram #albumcovers #music #albumreview #Instagood #Instaphoto #PicOfTheDay #ForTheGlory #betternoisemusic
#ScholasticPerspectives (formerly known as #MadnessToCreation)’s #HonorRollRecipient of the day goes to @loreleimarcell for her work on her latest #ep. #LoreleiMarcell’s #charisma , #drive #voice and #songwriting abilities allow her to write an EP that is palatable and such a wonderful listen. Some of the lessons this #educator learned include:
@transviolet put on the show of a lifetime at @skywaytheatre …this #band should be selling out #arenas, that’s how good they are. #indiepop #indie #Instagood #PicOfTheDay #pop #podcast with @sarahthegrape coming soon! #rebranding to #TeachGetNTeached coming soon! #love #gigphotography #iphonography #postcovid19 #mentalhealth #WeGonLearn #education #goat
@vialbandofficial crushing it providing support for #transviolet on the #DrugsInCalifornia tour! Nice to see a #localband getting their time to shine on the stage. #instagood #instaphoto #podcastersofinstagram #gighotography #concertphotography #loudmouth #picoftheday #postcovid19 #livemusic #indierock #punkrock #minneapolis
@loreleimarcell absolutely crushing it providing support for #transviolet on the #DrugsInCalifornia tour! Come on out to #studiob at @skywaytheatre in #Minneapolis #postcovid #rebranding #teachgitntaut #podcastersofinstagram #photography #indiepop #music #livemusic #concerts
For #MindfulnessMonday, use that personal day. Take a day off. Just breathe, pray, meditate. Whatever it is you like to do. Listen, you got this. Whatever you’re going through. You have myself here to think of and pray for you. My DMs are open for anyone that comes across this page. #YouGotThis #mentalhealth #pullingforyou #YouFreakingMatter #instagood #meme #PicOfTheDay